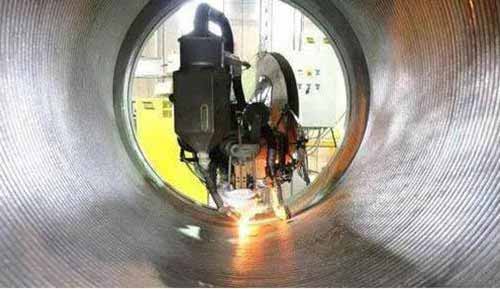 As an economical and rapid process for surface modification of materials, surfacing is increasingly used in the manufacture and repair of parts in various industrial sectors.The most widely used chemical equipment is the use of welding methods (such as belt surfacing) to weld corrosion-resistant austenitic stainless steel, nickel-based alloys, etc. on the inner surface of the equipment. such as:

In order to effectively exert the role of the weld overlay layer, the commonly used surfacing method has a smaller base metal dilution and a higher deposition rate to obtain an excellent weld overlay performance.High-quality, high-efficiency, low-dilution surfacing technology is increasingly used in a variety of industries, such as waste incineration systems, manufacturing and maintenance, ship engineering, power, machinery industry, petroleum and petrochemical industries. The carrier has valves, pipes, fittings, flanges and plates.

Controlling the welding process of these materials can economically use the corrosion resistance of materials and cost-effectively serve industrial enterprises. In recent years, there have been many applications in China for large-scale surfacing.

Waste incineration power generation is an effective way to deal with domestic garbage. It has the characteristics of volume reduction, harmlessness and resource utilization. Due to the complexity and heterogeneity of the waste components, various corrosive media, mainly chlorides and sulfides, are produced during the incineration process. After analyzing the contents of HCl and SO2 in the flue gas of the waste furnace, it was found that the HCl content was significantly higher than that of SO2, so the main corrosion was mainly chlorine.

Cl often appears in the incineration environment with gaseous HCl, Cl2 and metal chlorides such as KCl, NaCl, ZnCl2, PbCl2 and the like.

In the high-temperature chlorine-containing atmosphere of the incinerator, in addition to direct vapor phase etching, these metal chloride low-melting ash deposition salts and the oxide film of the metal surface layer undergo oxidation-reduction reaction to corrode the metal matrix. In addition, it will be deposited on the metal surface together with other inorganic salts in the flue gas to form a low-melting eutectic, which greatly reduces the melting point of the ash, and produces a molten corrosive salt on the high-temperature pipe wall. A local liquid phase is formed at the interface to form an electrochemical corrosion atmosphere.

Thus, as the corrosion progresses, a loose outer oxide film is formed on the outer surface of the molten chloride. This electrochemical process severely erodes the water wall of the boiler and overheats due to the large diffusion rate of the metal ions in the molten salt. The metal components of the device and the like cause degradation and failure of the performance in advance.

In view of the corrosion problem of the heating surface tube of the waste heat boiler, the method of welding high temperature corrosion resistant nickel-base alloy material on the outer wall of the boiler tube is generally adopted. The traditional surfacing method has serious damage to the boiler tube substrate, and the dilution rate is 10%-20%. Between, it is difficult to meet the use requirements. The CMT (Cold Metal Transfer) welding system is used to weld a layer of high temperature and corrosion resistant nickel-based Inconel 625 material on the heating surface of the boiler, which can effectively solve the corrosion problem of the heated surface tube and prolong the service life of the boiler.

HY-industry is qualified superalloy supplier.We have more than 20 years experience in kind of  L605，Haynes 188