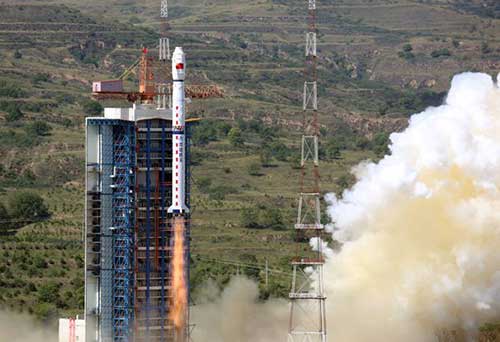 At 14:35 on November 13, 2019, China used the Long March 6 launch vehicle at the Taiyuan Satellite Launch Center to successfully launch the Ningxia No. 1 satellite (also known as the Zhongzi Satellite) in a five-star manner. The track was scheduled and the mission was a complete success.
Ningxia No. 1 5 satellites are commercial aerospace projects independently invested by Ningxia Jinsi Information Technology Co., Ltd. Satellites are mainly used in remote sensing and other fields.
The Ningxia No. 1 satellite and the Long March 6 carrier rocket were developed by Aerospace Dongfanghong Satellite Co., Ltd. and Shanghai Aerospace Technology Research Institute respectively.
The mission is the 318th space flight of the Long March series of launch vehicles.
A little more news: the “amphibious command” of the launch site
On November 13th, a launching site of the Taiyuan Satellite Launch Center, the Long March 6 carrier rocket pointed to the sky and waited for the expedition.

“…3,2,1, Ignition!” With a confident and clear command, the Long March 6 rocket vacated. The name of the issuer is Li Cheng, the commander of the “01” of this mission. From the first flight of the Long March 6th, “One Arrow and 20 Stars” set a new multi-star record to carry out the first sea launch mission in China, and then to today’s “Ningxia No.1” mission, whether it is the Star Sea or the Jinbei Plateau, With more than 100 launching experiences, he was admired by his colleagues for his superb skills and excellent emergency response capabilities. He was graciously referred to as the “amphibious commander” of the launch site.
As the “01” commander, you need not only excellent business skills, but also a good attitude and emergency response capabilities.

In 2015, the heavy burden of the first flight of the Long March 6 rocket fell on Li Cheng. When the highly anticipated Long March 6 launch vehicle stood on the launch tower and entered the launch countdown procedure, the primary engine failed and the launch procedure was forced to stop.

The rocket carries a large amount of high-performance fuel. After the termination of the launch procedure, the fault must be eliminated as quickly as possible, otherwise there is a huge risk. On the occasion of the first round, Li Cheng led the team to carefully check the status of the rocket and ground equipment during the suspension process, and successfully completed the recovery of the rocket, ensured the safety of the rocket that had been filled with liquid oxygen, and carefully studied the organization that delayed the organization of the launch 24 hours later. Command procedure.
After 24 hours, the Long March 6 rocket re-entered the program to launch on time, creating a new space record of “one arrow and 20 stars.”

Stellite series is a mature product successfully debugged by our technical team after five years.