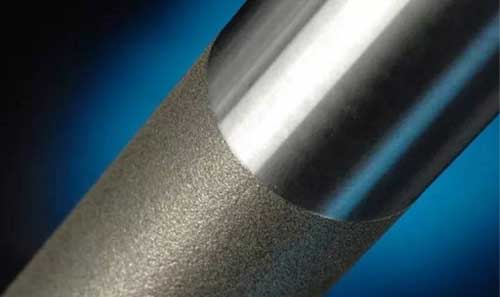 As of September this year, EU countries may not allow the use of hard chrome plating in metal parts. Based on this situation, another process is needed instead of hard chrome plating. Thermal spray has been tested for high flexibility, but the results of the tests are often poor. Another very good alternative to hard chrome plating is the ultra-high-speed laser cladding recently developed by scientists at the Fraunhofer ILT in Aachen, Germany, using equipment from Laserline, Germany.

In power plants or other industrial manufacturing plants, the metal parts of mechanical equipment are often subjected to great tests in terms of wear and tear. Process parameters and general production environments are often poor, leading to corrosion and wear of some of the most important metal parts. In order to cope with these situations and to extend the service life of some particularly expensive production equipment, the metal parts of these equipments are coated with a special coating. The entire surface of rotating parts, tubes and other functional parts is provided with a metal or ceramic coating.

This increases the corrosion resistance of the workpiece to heat, moisture, aggressive chemicals, and metal debris and spatter. The processing that is often used is an early method called hard chrome plating. It is an electroplating method in which a workpiece is immersed in a chromium electrolyte and thus covered with a chromium layer. If a special part does not require a coating, the part will be wrapped before being immersed in the electrolyte solution. It is especially suitable for large-format and large-sized parts, and the selection area next to it is also possible to coat.

Chrome plating or will be banned, new coating technology is imperative

The future development of hard chrome plating has not been finalized. Although hard chrome plating is very successful at this stage, the commonly used chromium oxide (CrO3), also known as hexavalent chromium (Cr6+), together with other chromium-containing substances has been adopted by the European Commission. Defined as hazardous to humans in 2013 and included in Article 14 of the Annex to the Regulations on the Registration, Evaluation, Authorization and Restriction of Chemicals, this is often discussed in the Regulations for inclusion in the Annex. Use of chemicals of “Substances of Very High Concern” (SVHC). Starting in September 2017, these substances can only be used after obtaining a special and limited period of certification from the European Chemicals Agency. The procedures for obtaining these certifications are complex and can encounter some thorny issues even during the application process. For example, it must be proven and guaranteed that any SVHC (Substances of Very High Concern) will be used in absolute safety and that no other substance can replace the SVHC. If this is the case, the use of technically mature hard chrome plating, especially containing hexavalent chromium, may be controversial. As a result, the hard chrome-plated industry has been highly vigilant and has been defeated in a lawsuit in the European Court of Justice regarding the use of chrome.

Based on the above facts, there is no choice but to find alternatives and to provide new technologies to any business that uses the above technologies. Anyone or company that relies on chrome plating technology is putting the entire business model at risk. The problem that everyone faces together is that the alternative technology is limited, technically available and cost-effective. Thermal spraying used in the industry, the excipients are used in the form of a powder which is melted by a burner and a ‘flame’ and sprayed through a hot gas injector onto the surface of the desired coated part. The molten material is attached to the surface by mechanical bonding. Since a variety of different materials can be used as coatings, the great flexibility of this approach is manifested, and the main disadvantage of this process is the limited maximum mechanical stress level. This is due to the mechanical bond between the substrate and the coating material, which has less “negative gravity” than the bond produced by the electroplating process.

Therefore, the coating produced by thermal spraying will wear out more quickly. In addition, thermal spraying creates porous surfaces and material layers that can easily cause cracking and often cannot be repaired by the original method. The next result is usually a partially transmissive layer that is not comparable to a hard chrome coating. In order to achieve a porosity in the range of 1-2%, the thickness of the coating will increase, which in turn affects the process cost, so it is believed that thermal spraying will replace the plating with a maximum of partiality.

High-speed laser cladding is another option

A better prediction for the future is the cladding process using powder as the material and laser as the heat source. The laser cladding uses a coating as a powder, usually a metal powder. The laser radiation simultaneously melts the metal powder as well as the substrate material and produces a metallurgical bond, and the two molten materials are joined together in the dilution zone. These metallurgical bonding layers are much more resistant to thermal spray coatings and can even enhance the wear resistance of electroplated coating components. In addition, laser cladding produces a dense layer with no voids and cracks and adds some advantages. However, the success of laser cladding in industrial applications is limited, mainly for two reasons:

The key to success is to increase the strength of the focal plane. Although standard laser cladding uses a spot size of 2-3 mm or larger, this new method is based on a spot size of 1 mm. In addition, it is necessary to study laser spot positioning, powder supply and shielding gas.

Conventional laser cladding is the melting of the matrix material and the alloy powder, on which basis the weld pool is created – they are only fused in this plane. Ultra-high speed laser cladding heats the powder particles to near the melting temperature, which both increases speed and helps reduce coating thickness. The two process principles are shown in Figure 1. The powder particles produce more or less molten particles at elevated temperatures, which only require brief contact with the molten pool of the substrate to produce the desired metallurgical bond. This method brings speed up compared to conventional processes that melt particles in the bath. In contrast, the molten pool in the substrate requires much less energy. In some cases, the required laser power can reach 20 KW using an equal amount of powder, while the high speed laser cladding process requires only 2 to 4 kW of laser power. Therefore, based on this efficiency, while reducing the purchase capital investment and operating costs, this process is more economical. Finally, this laser cladding produces a non-porous coating with a very low surface roughness and requires little processing after application.

With this high-speed laser process, there is a better choice than the thermal spray process, which is the most likely alternative to hard chrome plating.

As early as 2016, the first customer project was successfully implemented using the Laserline GmgH laser based on the patented technology developed by ILT. As this technology has attracted a wide range of strong interest around the world, many partners are carrying out more projects, and high-speed laser cladding will be installed and put into use more and more in the industry.

Although the process was initially only applicable to component coatings in rotation, there are now more ideas and methods to create more options for achieving coatings on differently shaped workpieces.

Shanghai HY Industry Co., Ltd will therefore engage in more development and use its products more in the field of ultra-high speed laser cladding.